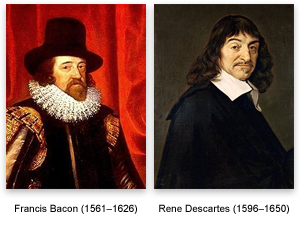 All modern scientific progress and invention can be traced to the application of the Scientific Method to real world problems.  The two men credited with laying the groundwork for the Scientific Method are Rene Descartes and Sir Francis Bacon.  Descartes gave the philosophical kick start to question everything in the natural world and Bacon gave the method to uncover objective truth.  Both men are giants in their chosen fields and together have influenced our world more than anyone else in history.

The largest contribution that Descartes made to the birth of the Scientific Method was one simple idea.  Descartes said, “I think, therefore I am”.  Which means that the only thing you can count on in this life, the only thing you can take for granted is that you exist.  Everything else is in play.  Descartes encouraged people to question everything.  And he meant everything. Don’t take anyone’s discoveries as the gospel truth until you can prove it yourself.

This is a revolutionary idea because for the entire stretch of human existence people used appeals to authority as proof that they were right.  Whether they used the Bible, Aristotle, or the Pope ‘thinkers’’ before the Scientific Revolution used these paragons of authority to stifle intellectual curiosity instead of cultivating it.  Aristotle and his theory of the geocentric universe is the best example of this.  For over a thousand years scholars in the west treated Aristotle’s writing as if they were Gospel and should not be questioned.  When someone tried to question the geocentric universe the Catholic Church’s Inquisition courts put them on trial.  Some scholars were executed for heresy for questioning Aristotle!  At some point a Pope endorsed Aristotle’s geocentric universe and it became sacred which is why the Church was prosecuting these people for heresy.

Sir Francis Bacon wanted to create a new focus on an empirical scientific method that depended on tangible, repeatable, physical proof.  Experiments were conducted to gather data and analyze it so the information would organize the natural world in a rational way.  Bacon believed that if science was used in this way it would become a tool that would benefit humanity.  In 1620 he published Novum Organum Scientiarum (New Scientific Method) that detailed how experiments and scientific research should be conducted.

If you google “Scientific Method” you will find a few different versions of what the Scientific Method is.  Some Scientific Methods have combined steps, some have left procedures out, and there is no universal agreement on what to call the procedures.  All methods for inquiry that claim to be scientific agree on the following steps in one form or another. 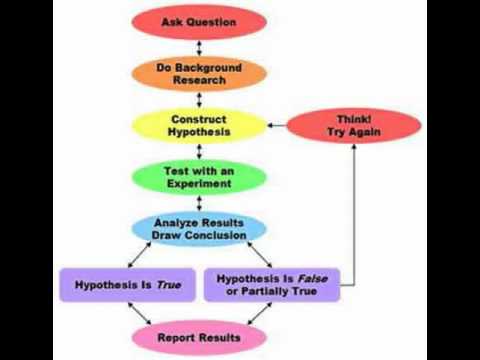 If you completed the Galileo experiment on Day 2, you have already done the Scientific Method!  You are sooooo smart!

Today’s challenge is to recognize where you use the Scientific Method in your daily lives.  Whenever you follow the procedures for identifying a problem, figuring out how to solve that problem, conducting an experiment, and analyzing the data from that experiment we want you to say “THANK BACON!”

Even if you are watching dishes by hand you are doing the Scientific Method.  Think about it.  You have a problem (a dirty dish), you hypothesize on how to solve that problem (washing in warm soapy water and rinsing it with clean water), you conduct an experiment (putting the dish in the sink to wash it), and you analyze the experiment (is the dish clean now?).  You may have to revise your hypothesis and repeat the procedure if the dish is still dirty (need more soap or need to scrub harder or use a different sponge then rinse with clean water).  Analyze the data from the experiment (is the dish clean now?).  If the experiment was a success put it in the dish rack to dry (or use a towel) or repeat as many times as necessary to achieve the goal of a clean dish.

Every time you clean a dish or use the Scientific Method we want you to say, “THANK BACON!”.  Every time you use a piece of technology that came from the Scientific Method say, “THANK BACON!”  We think it is time to give credit to the man who is responsible for the creation of more technology than any other human being in history.  Sir Francis Bacon may have a larger legacy than any other person on the face of the earth.

Scream it from the mountain tops!  THANK BACON!

My personal opinion is that Sir Francis Bacon was slightly more important in this process which is why I say THANK BACON!  Also, I always butcher Descartes name so I am self conscious about saying it aloud, so I am going to stick with THANK BACON because I know how to say that.