While Europe was mired in the Dark Ages, other parts of the world were experiencing scientific golden ages.  In the far east China was experiencing a rapid expansion of technology during the Song dynasty from 900 to 1100 AD.  In the Muslim world, which stretched from India to Andalusia (Spain), a scientific awakening was occurring at roughly the same time.  It is a matter of intense academic debate as to which culture influenced who to become smarter and more advanced.  Some scholars maintain that the Chinese took technology from the Muslim world while others accuse the Muslims of ‘borrowing’ Chinese advancements and spreading them around the Muslim world.  I’m going to leave most of that historical debate for another time and place.  There was one technology that the Muslims blatantly stole from the Chinese which made their advancements in technology much easier to acquire.  That technology was paper.

After the battle of Talas in 751 between the Abbasid Caliphate and the Tang dynasty led by Emperor Xuanzong, Caliphate forces had the good fortune of capturing some very special Chinese soldiers.  These soldiers knew the secret of papermaking.  The Chinese had been making paper for hundreds of years and were adept at using paper to aid in administration of government and the military.  It is not surprising that the forces of Emperor Xuanzong were carrying papermakers since the army needed paper to issue orders and keep track of the million and one things an army needs while marching and fighting.  Once the Caliphate realized who they had captured, they sent the papermaking soldiers to Samarkand to show Caliphate administrators how to make it and spread this knowledge all over the muslim world.  In fact by the year 795 paper was being made with the Chinese method in Baghdad.  Baghdad was the capital of the Caliphate, the intersection of every major trade route on earth, and would become the home to the House of Wisdom.  Once the secret of paper made it to Baghdad it was only a short time before paper started showing up in Europe, Africa, and every corner of Asia.  Some historians maintain that paper was the one of the fastest spreading technologies in the medieval world.  Papermaking was second only to gunpowder which skipped across Eurasia in less than a generation.

The Muslim world was ready to exploit the introduction of paper because Islam placed such an emphasis on literacy.  In Christian Europe most of the people who could read were members of the clergy, an overwhelming majority of regular people were illiterate and dumb as rocks.  There was no requirement that you know how to read in order to be a Christian.  In fact, if you did know how to read it probably would not do you any good since everything was written in Latin, a language that only the clergy understood.  The situation was much different for a practicing muslim.

Muslims believe that the Quran is the direct word of God given to the Prophet Muhammad in the early 600s.  Muhammad spoke arabic the language of the Quraysh tribe he belonged to that inhabited the area on the Arabian Peninsula around Mecca during his lifetime.  Naturally, the Quran is written in the language that Muhammad spoke.  Muslims believe that the only true form of the Quran is in Arabic.  Once the Quran is translated into another tongue the translation is not longer the pure form of God’s word.  Also, another major difference between Medieval Christianity and Islam is that in Islam there were no established clerics for the vast majority of the muslim community.  There were formal and informal leaders among muslim communities of faith but there was no bureaucracy that existed solely to explain and interpret the word of God to the common person.  In fact, in Islam followers were expected to read God’s word for themselves and make their own decision on how to worship Allah from Muhammad’s prophecy in the Quran and his example in the book of his life (the Sunnah).  In order to be a good muslim you were expected to read and understand Arabic.  With no formal educational infrastructure when Islam started, this was a tall order.

The way that this problem was solved was that everywhere that Islam was carried teachers went with it.  Mosques doubled as places of worship and schools that taught the newly converted how to read and write in Arabic.  This was a serendipitous occurrence because as Islam spread from the Indus river valley to the Atlantic ocean the common language of religion became the common language of government, administration, trade, and education.  Literate people could read and write Arabic because they were good Muslims and they could use this literacy coupled with paper to effectively advance education, science, and technology.  Mosques doubled as schools that taught the devout the Quran.  These schools grew into madrasas that taught non-religious subjects like science, math, and the law.  These madrasas became the basis for the University system in the Muslim world which was transferred to the west in the 1000s.

So today we are going to honor Islamic madrasas and the granting of degrees written on paper from China.  Specifically, we are going to recognize the founder of the first formal madrasa in the world, the University of Karaouine in Morocco.  This was the first institution in the world to grant degrees to students upon completion of their studies.  Al-Karaouine was founded by Fatima al-Fihri in 859.

Here is an exerpt from http://lostislamichistory.com/5-muslim-inventions-that-changed-the-world/ that explains this extrordinary accomplishment in greater detail.

“Speaking of universities, that is also an invention made possible by the Muslim world. Early on in Islamic history, mosques doubled as schools. The same people who led prayers would teach groups of students about Islamic sciences such as Quran, fiqh (jurisprudence), and hadith. As the Muslim world grew however, there needed to be formal institutions, known as madrasas, dedicated to the education of students. 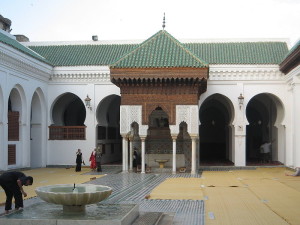 The University of Karaouine in Fes

The first formal madrasa was al-Karaouine, founded in 859 by Fatima al-Fihri in Fes, Morocco. Her school attracted some of the leading scholars of North Africa, as well as the land’s brightest students. At al-Karaouine, students were taught by teachers for a number of years in a variety of subjects ranging from secular to religious sciences. At the end of the program, if the teachers deemed their students qualified, they would grant them a certificate known as an ijaza, which recognizes that the student understood the material and is now qualified to teach it.

These first degree-granting educational institutes quickly spread throughout the Muslim world. Al-Azhar University was founded in Cairo in 970, and in the 1000s, the Seljuks established dozens of madrasas throughout the Middle East. The concept of institutes that grant certificates of completion (degrees) spread into Europe through Muslim Spain, where European students would travel to study. The Universities of Bologna in Italy and Oxford in England were founded in the 11th and 12th centuries and continued the Muslim tradition of granting degrees to students who deserved them, and using it as a judge of a person’s qualifications in a particular subject.”

What makes this accomplishment particularly astonishing is that the University of Karaouine was founded by a woman.  There were parts of the muslim world that were pretty progressive in 850 but to have anything this important started by any woman was remarkable.  It is because of Fatima al-Fihri that millions of people have received degrees from programs of study.  Fatima al-Fihri was a remarkable woman whose invention has helped incubate and create scientific progress for over 1000 years.

How do we honor such an amazing accomplishment?  Today you should make a commitment to formally study something in the next year.  Whatever you study is up to you.  If you want to take a class and get a degree, that is awesome.  If you want to scour the internet and your local library to learn a certain topic, go for it.  If you want to apprentice with someone that is proficient in a subject or skill, more power to you.  The only requirements that you need to follow is to enjoy what you are learning and be willing to pass it along to another person.

Just another word of advice before you take this journey.  It is OK to be ignorant and not know everything.  Remember that there is a difference between ignorance and stupidity.  Ignorance is not knowing what is inside the book because you haven’t read it, stupidity is reading the book and ignoring good ideas that are inside it.  Very simply, it is OK to be ignorant but don’t be stupid.